I’m a Kanban and Agile enthusiast, and as such, I’m doing my best to help my fellow colleagues to be better at their profession. It is also important to me to give ideas back to the community and exchange practical things with others, so I started the Budapest Lean and Kanban Meetup group, where organise events and keep presentations and workshops. 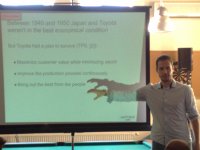 My career with software development started in 1999, while I was studying at the University of Miskolc, Hungary. At the university I kept different Java and Unix/Linux workshops for other students.

My professional career started at evosoft Hungary Ltd (2004 - 2009) where I started as a software developer, and I left the company in 2009 as a Scrum practitioner, software architect and assistant project manager.

After evosoft, I worked for Ericsson Hungary (2009 - 2011) where I did very different tasks than before: I became a Certified Scrum Master and Agile Champion, which meant more mentoring in Kanban, Scrum and eXtreme Programming besides the usual development activities. I was working mostly with Kanban and a bit with change management. My main focus was on finding different ways to improve the organisation I was working in, getting better at what we were doing, and being more Agile in every field of software development.

In 2011, I though that it was time to see and learn how a start-up company operates so I joined Digital Natives Hungary as a Senior Developer. I wanted to get out of my comfort zone and try myself out in a smaller organisation and much closer to the customers. Digital Natives believed in the Agile methods, which is one of the main reasons I applied for a job there, and they were working with Ruby on Rails, which is said to be the most agile software framework available on the market.

I had a great time at Digital Natives (2011 - 2012), but I wanted to do work in a completely different environment than before, so I made a quick decision and joined Ericsson Finland and moved to Helsinki. My contract says that I’m an Agile Coach, but technically I’m doing exactly the same as before: working with teams and helping them become better.

My Finnish Journey wasn’t that long, and I returned home. After a while, I’ve started working for Prezi (2013 - ) in different roles. I have been an Agile Coash, a Team Lead, a Developer, and a Project Manager.

It is very important to mention that the views expressed in this web page are the views of mine and they do not necessarily reflect the views or policies of my current or former employers.