There are certain ways to appreciate efforts and achievements; the most common one is a salary bonus. As Daniel H. Pink pointed out in his book “Drive” that kind of reward can kill the intellectual motivation and productivity. Nevertheless, I’m not in the position to give money to colleagues, but I still want to remunerate the agile efforts in some way. I introduced the agile trophy (below) in our small organization. 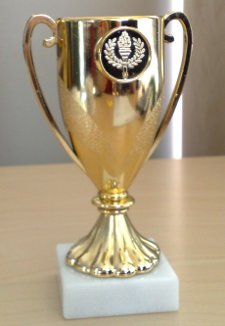 Each week, during our weekly stand-up meeting which everybody attends, I give the trophy to the colleague who did something agile on his or her own. This “something agile” can be an improvement in eXtreme Programming techniques, a proactive problem solution, an outstanding performance during a coding kata or anything similar. The only thing that matters is that the achievement come from inside, not from somebody else saying or suggesting it. Of course, the reason for awarding the trophy is explained during each meeting.

I decide who gets the trophy on a particular week based on my own judgement. I believe that when I had a checklist or something similar people would try to live up to that checklist and the whole idea did not serve its purpose, i.e. to acknowledge the efforts, and show an example to the others. If there are too few achievements during the week, I consider older ones. If somebody owns the trophy for five weeks in a row, he or she can keep it.

The agile trophy is a cheap but effective way to make agile efforts and values visible, and on the other hand, it starts a small and healthy challenge inside the organization. Try it out and give me feedback on how it worked in your organization.