A couple of weeks ago my team started to do things differently than before, and I promised I’d write about the effects of certain changes and new improvements. Effective and fluent communication is essential for an agile workspace, but unfortunately our former seating layout didn’t support either of that, so we changed it, inspired by an idea from Martin Fowler.

Have a look at the following seating layout (I modified the layout a bit due to privacy reasons): 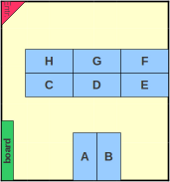 At first sight, this is a regular seating layout, everybody can do their work in it, so far so good. Let’s have a look at it from the communication perspective. Communication is effective when there are no barriers, but unfortunately this specific layout is full of physical (the worst kind) barriers: 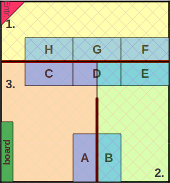 There are two borders (the red lines on the picture), which cut the team area into three separated isles (1, 2 and 3). A border can be a small wall or even a larger monitor. Sometimes the wall isn’t something physical; when someone has to stand up regularly in order to see something which somebody else is showing to her, then eventually she will stop standing up and communication between them will cease, because it is not convenient for her (for example in case of ‘H’ and C’).

Inside these isles the communication can flow well, for example ‘B’ can talk/show things to ‘D’ and ‘E’ without problems and vice versa. On the other hand, when ‘H’ wants to participate, she has to stand up and go their isle/area, or ask them to talk lauder. Additionally, there is no way that they can show something to her easily. Based on my experiences and observations, when it’s time for pair programming, people pair up with someone from within their isle. This means that ‘H’ will rarely work with ‘B’. This is the best way to have small cliques instead of a team in which everybody works with everybody.

Let’s see how the communication flows for ‘H’ in this layout: 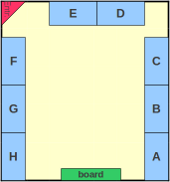 She can talk or show something to everyone without any barriers. Additionally, she doesn’t have to stand up: since almost every office is equipped with roller chairs, she can just roll over to ‘B’ or ‘D’ or to anyone: 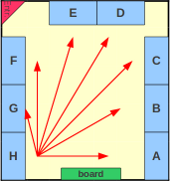 Let’s have a list of advantages of this particular layout: 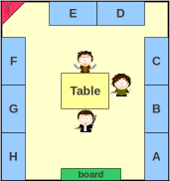 There are disadvantages as well:

If you plan to sit in a similar layout, prepare for several conflicts. Most of the people have no problem with moving around, but there are people out there who don’t really like to change places. They are good people, but they don’t like to get out of their comfort zone. You’ll need to talk to them and consider the team’s interest over the individuals’ interest. If talking does not work, use a strong hand: tell them that this is what you (as a team leader) want them to try out, and give a chance to the team to perform better. It usually works in nine cases out of ten.

Last but not least, there will be comments like: “My monitor will face the team area, then everybody will see what I’m doing”. As a team leader - in this case change driver -, you have to ensure that people won’t see this change as an act of the big brother. The goal is not to check on people, but to create a more productive and effective working environment. Having regular, but not hour-long breaks looking at non-work related web pages or applications is fine - actually, it is recommended. You have to make this clear to everyone. On the other hand, if there is self-interest behind that comment (regular, non-work related activities), than you have to handle it accordingly. Fortunately this is a very rare case, but I’d like to cover every angle you may come across.

We have been sitting in this layout for a month now and, based on the feedbacks, colleagues like it. Even the skeptical ones came by and told me that they liked it. In the previous layout there were only eight working places in our team area, and with the new layout we have nine, and still the team feels that we have more space than before.

I can’t help but recommend this kind of seating layout. It is really perfect for agile teams. If your team consists only of three people, even for such a small team, consider changing your seats, and you’ll see that the team will perform better.