I’m working on an interesting refactoring project at the moment. Today, I found a strange part in the code and I was really curious who implemented it and why, so I run git blame to learn more about it. Since I cannot share code from the customer’s repository, I’ll use the code from one of my repositories. Let’s say that the Munger.java is not working as it is supposed to work, and the test framework reports problem at line 9:

It seems that the commit e26fd52f affected that line, let’s see what the change is about:

This is what I saw during the day: someone did and irrelevant change - indentation fix in this case -, which prevents me from learning about the change that I’m actually interested in. Fortunately, git is the best version control system on the market, and provides some help in cases like this one.

The first solution is for those who like to solve problems using the command line. The blame command accepts a commit which specifies the starting point of the search. If this commit is not specified, blame will use the HEAD as starting point. So in our case the starting point should be one commit below the e26fd52f commit (mind the ‘^’ meaning below) so that the already known indentation problem won’t show up again:

There is another commit - 30b4cae4 - which changed that line, but not the surrounding lines. It’s getting interesting, let’s see what that commit is about:

I found the culprit. No test cases, a meaningless commit message, but now I know who to blame for the current problems. Although I like the command line interface of git, this kind of investigation needs a lot of time. I usually use the git gui command for committing - you have to install the gui extension first -, and I’ve learnt today that it also has an option called blame, which does the following: 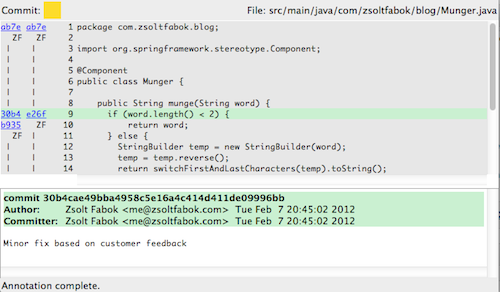 With a single command I can see the commits which affected the line I’m interested in. This makes investigation really fast and successful. I hope it’ll also help you narrow down your searches for certain unexplained changes.