If you follow the recent events and discussions in the Agile/Lean community, you most probably have heard about the #rightshifting movement, which uses the so called Marshall Model to figure out the actual mindset of an organisation and help them to move from a less effective stage to a more effective one through intermediate stages. When Bob Marshall was explaining it in practice at Lean Agile Scotland 2012 I was thinking what if it was possible to skip these intermediate stages? When I was looking at the model as a chart, my idea only seemed possible via a huge jump which is always expensive and usually impossible, but what if the model is not represented as a chart, but a cylinder? In this case the transformation does not require a jump: it is “simply” a walk from one stage to the other.

Disclaimer: with this post I have no intention to change or improve the existing model, or create something new. I got an idea which I’d like to share with you. That’s all.

Before explaining my idea in more detail, I’d like to introduce you to the Marshall Model, more precisely the Marshall Model of Organisational Evolution created by Bob Marshall somewhere in 2008 and documented as a White Paper in October 2010 (by the way, happy birthday!):

It is a chart based model, which defines four major stages, which are, in ascending order of effectiveness: ad-hoc, analytic, synergistic, and chaordic. The goal of the #rightshifting movement is to help organisations to be more effective by moving to a stage to the right of their current stage, hence the name: #rightshifting.

I have no intention to copy and repeat the whole White Paper, but I need the exact definitions of the ad-hoc and chaordic stages in order to explain my idea:

“Ad-hoc: ad-hoc organisations are characterised by a belief that there is little practical value in paying attention to the way things get done, and therefore few attempts are made to define how the work works, or to give any attention to improving the way regular tasks are done, over time. The Ad-hoc mindset says that if there’s work to be done, just get on and do it - don’t think about how it’s to be done, or how it may have been done last time.”

“Chaordic: the chaordic mindset believes that being too organised, structured, ordered and regimented often means being too slow to respond effectively to new opportunities and threats. Like a modern Jet fighter, too unstable aerodynamically to fly without the aid of its on-board computers, or sailing a yacht, where maximum speed is to be found in sailing as close to the wind as possible without collapsing the sails, a chaordic organisation will attempt to operate balanced at the knife-edge of maximum effectiveness, on the optimal cusp between orderly working and chaotic collapse.”

So, in an ad-hoc mindset, typically chaos reigns, and in the chaordic mindset there is chaos and order (chaordic is a made-up word, it was created by mixing the words chaos and order).

Similarities between the Ad-hoc and Chaordic Mindsets

Apparently, all of these stages contain a certain level of chaos. However, when I’m looking at organisations in different kinds of stages from a distance, they all look the same: delivering software without using any formal process. I asked Bob about this, and he said that the difference was the discipline. In my head, if an organisation in an ad-hoc stage can develop discipline, it can be ordered, and with that it can get to the most effective chaordic stage.

The second similarity comes from my observations and hypothesis: the level of understanding creativity in ad-hoc and chaordic stages is almost the same (side note: I believe that software development is creative work):

A couple of years ago, I was a member of a team which was clearly in the ad-hoc stage. Our days were chaotic, and we were so focused on delivering that we didn’t pay attention to anything else. For example, being more effective - rightshifting - was never discussed, however our solutions were creative and we wanted the next solution to be creative as well. After a while, we realized that we couldn’t work like this any longer, it was so frustrating that we felt we had to do something about it. The conclusion was that we needed structure, so we gave up creativity and used the freed up time and effort to introduce it. After that, we went through all the stages of the Marshall model and before we got dismissed we spent some time in the chaordic stage. During this relative short amount of time, we had nostalgic discussions about the creative ideas we used to have in the ad-hoc stage and how good those times had been. So, we started to bring these ideas and discussions back to our daily work, and rediscovered the advantages of creativity. Since we were much more disciplined by then, it wasn’t that hard to do this one last shift and become creative again.

Jump from Ad-hoc to Chaordic

When I see two stages which have similarities, I immediately start thinking about how to get from one stage to the other, because it may be possible. Unfortunately, it is not that easy in this case, because those two stages are on the opposite edges of the Model, and the immediate transformation is only possible via a huge jump over the whole model:

This jump is really expensive and I dare say it is not even possible using the current understanding. It is like learning how to do freestyle swimming on the floor of the living room and the next day heading to the Ocean jumping into it and trying to get out alive.

However, if we give up this thinking and the chart based linear end-to-end approach, and present the stages on a cylinder where one can walk around instead of a chart, then we aren’t talking about a jump any more, because it is a walk from ad-hoc to chaordic like this: 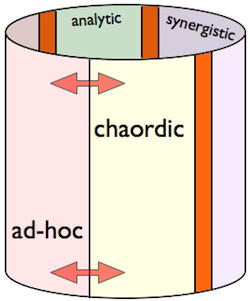 In this representation ad-hoc and chaordic can stay next to each other, because they share common grounds such as the chaos and understanding of creativity. The effort to get from ad-hoc to chaordic is the effort to build up discipline in the organisation.

Again, this is just an idea which came to my mind when I was listening to #rightshifting talks at Lean Agile Scotland 2012. What do you think about it?

PS: I used images and quotes from Bob Marshall’s White Paper with his permission.