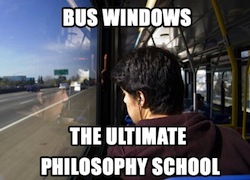 A good friend of mine and I were chatting about why teams considered as suppliers (back office) work noticeably more than those working with or for the front office. We didn’t jump to any conclusions, and we started to talk about something else, but it kept bugging me, which is never a good sign. I knew that I wouldn’t go to those teams and ask them questions (which would have been a better way to put an end to this issue), and it wasn’t really that important either, so I tried to figure it out by myself during a longer bus ride. As my current theory goes, the back office has the false belief that they don’t know enough about the domain, therefore they spend a huge amount of work on filling in the imaginary gap in their competence, but despite every effort they won’t be able to succeed. Their approach is wrong, and here is why.

I’m sure that there are cases when this phenomenon is explained by the fact that the managers of the back office are afraid that if the managers of the front office won’t see a 100% percent utilization they are going to look for another supplier. It can also be a simple cultural difference. I was generous to myself and I simplified the scenario by eliminating these and similar variations, and said that the front office looked at the back office as equal, most of the decisions were made together, and they considered the back office as a long term strategic partner. This was the case in the situations my friend I were talking about before. But even under these circumstances I spotted the phenomenon. 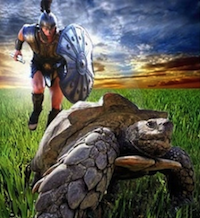 Although I enjoy having philosophical conversations, let me stop here and bring psychology to the table, because the fact that the back office (Achilles) won’t give up or do something else in a deteriorating situation like this, can be explained.

In school we learned that with diligence it was possible to get a good score or even the highest score, but it seems that this doesn’t apply here. I see the problem in the difference of the contexts: at school the target was fixed (the knowledge we had to present at exams) and the iterations were also fixed (the number of grade levels), but at the workplace the target is moving, and there is an infinite number of iterations (like in the case of Achilles and the Tortoise). Despite of the difference in contexts, the back office still tries to apply this “well proven and working” method to catch a moving target. 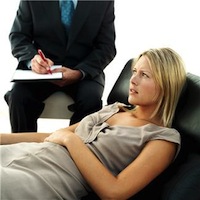 Chasing a moving target is hard, although when there are interim positive results and feedbacks, it is manageable, and sometimes there is some satisfaction during the chase. However, I’ve never seen satisfaction at the back office. I’ve seen frustration and dissatisfaction instead, because the interim positive results were missing. The brain doesn’t like to be in a state like this, so it tries to do something about it by using inherited (surviving) or learned skills. Usually, it picks the proper approach, but in this case it tends to make the wrong choice, because humans are loss-averse (another nice feature of our brain): they try to avoid losing things, which is the effort put into the catching-up in this case. Instead of giving up and trying a new way, our brain tells us to prevent this loss, so we keep doing the catching-up.

There are no best practices or world changing advices here. Wiser men have been trying to solve paradoxes for a long time with little success. Psychologists have built a very large and successful business on accepting loss and coping with it (called therapy sessions). Another friend said “Why do you care? It’s their business not yours.” He might be right, I don’t know, but I know one thing for sure: doing overtime to catch up - it’s like Achilles is cheating - won’t do any good. We did it once, managed to catch-up, but most of us got exhausted, others had family issues which caused a slowdown in our life, and we found ourselves right were started: behind the front office.

Well done Mr. Tortoise, you’ve won. Dear Reader, don’t take this post too seriously, since it is just a theory dumped from my brain after a long bus ride ;-)

(P.S.: if you have a major in psychology and/or philosophy and you happen to know that this is not the way things work, please correct me in the comments, and I’ll update the post).