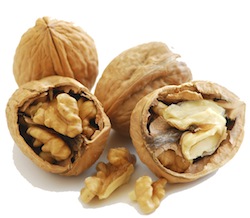 The current weather in Finland reminds me of the nice autumns we used to have back in Hungary when I was a kid (Hungary used to have four seasons, but thanks to the climate change, nowadays there are only two seasons: Summer and Winter). I especially remember the evenings about 15 years ago, when I was cracking walnuts with my grandmother in her kitchen. I remember telling her that we had to have more walnut trees so we could make a fortune selling walnuts. One kilo of peeled walnuts cost about 700 HUF at that time, when one earned about 560 HUF with manual labour a day. We had one tree, which produced about 20 kilos of walnuts a year, and we peeled this amount in 3-4 days (mainly during the afternoon and the evening), so we made about 14000 HUF in three days. A manual labourer had to do hard work for this kind of money for more than half of a month. The people to whom we sold the peeled walnuts always wanted more (there was a demand), so it was a great business opportunity. Unfortunately, my family didn’t value this kind of business at that time, because according to them, a decent man should have a decent job and this walnut thing is not it. It was just something to gain some extra money from for Christmas.

A couple of weeks ago, I was watching an interview with György Klapka - a Hungarian entrepreneur -, who actually built a business based on walnuts. He is a divisive figure in Hungary, who has always been looking for better and better business opportunities (maybe that’s why half of the country doesn’t like him). About 13 years ago - what a coincidence - when he was about 70 years old (!) he was looking for mid-term investments, because he wanted to support his children after he was gone. He had some land and decided to grow something. His imaginary time frame didn’t give him too much choice, so he started to look for something with a low investment cost, and high profit in the mid-term. During his research he read about cherries. It really fit into the equation and there was a demand, but the cherry business was really weather-sensitive: a lot of rain could damage the goods, which made them impossible to sell.

The second best thing he read about was walnuts. The possible profit margin was lower than that of the cherries, but the walnuts are more resistant to rain and other weather damages, so he decided to plant walnut trees on his property. A walnut tree produces its first crop after 3-4 years after planting, lives for approximately 80-100 years and doesn’t require too much care. The only thing one should take care of is a fast harvest. After the walnut has fallen down, the surrounding green casket needs to be removed very soon, otherwise it will start to create a certain black fluid, which colours the kernel, which makes it really hard to sell: it looks bad and tastes awful.

Back to the present, he has been running different kinds of businesses since then, but according to the mentioned interview the walnut business is his most profitable and steady one. I haven’t found any evidence that he is a lean or systems thinker, but his enterprise is very efficient and well organized. He had a road built, because the vehicles couldn’t easily reach the facilities, he bought the best available equipment so that the harvest was going as efficiently as possible, and automated almost everything, but only those parts which were necessary. For example, almost the whole harvest and processing is done with machines, however the peeling is semi-automated. The machine doesn’t peel the walnut it just cracks it so that the internal part is still in one piece, then the walnut gets transferred to the local prison where the inmates peel it for some money. His business isn’t built on the peeled walnut - like my idea was -, but it is a part of it. He distributes the walnut in Hungary and in Europe, and since the quality and quantity is very good, he has no problem selling the crop. This is not bad from a 83 year old man. I should have pushed my family a bit harder at that time :-)