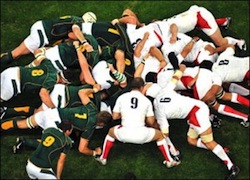 In the last couple of weeks, I was thinking a lot about daily stand-up meetings for two particular reasons: first of all, the meeting I was attending was inefficient, and second, something bugged me with the whole concept. We were following the structure introduced by the Scrum framework: every member talks about what she did yesterday, what she’ll do today and what is blocking her from achieving her plans. What really bothered me was the first question: “what did you do yesterday?”. If one works with a co-located small sized team why should one talk about the past? Talking about the past is a waste of time, or if it is necessary then something is wrong with the organization: people work together and they have no idea what the others are doing. Unfortunately, we talked a lot about the past. Management was interested in the past, so during the last months the whole meeting turned into a sync meeting, where we gave a report about our activities.

The sad thing is that we are always one day behind. Quite recently during a stand-up, a colleague of mine talked about an interesting database change. He implemented a workaround and gave us the highlights during the daily stand-up. I remember clearly that he got very good and usable feedback on a real implementation, not a workaround, but since the change happened in the past and it would have taken too much time to change it back, nothing happened and the workaround stayed. If he had mentioned this before, we wouldn’t have had to live with a workaround which will cause a lot of trouble later. This is the price we’ll pay later for living in the past.

I’m not saying that the past should be ignored, but the emphasis should be on the future and what is coming. As a team leader, I’m interested in what my colleagues plan to do. This is the information I need in order to help them with their tasks. If I know only what they’ve done, the only thing I can do is damage control.

In the last couple of weeks, I was working with Taso Du Val and he always asked the following question during our weekly meeting:

“What is your plan for the following week?”

I asked him why he started with this question instead of talking about previous achievements, and he replied: 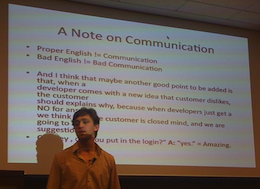 “I want people to see into the future as to what they’ll be working on and to what the entire team will be working on so they have a clear idea that progress is being made and that the team is synced up and there is a high-level of unity. Everyone should know that they’re moving forward in a direction, and when you’re all moving forward you should also know that you aren’t going to interrupt anyone elses work.  When you give people an insight into the future it moves people forward and motivates them to see what’s coming to fruition, and gives a sense of what the product is going to be like and the impact it will have. Knowing that the product is coming to fruition and completion is very important for everyone to know, and more importantly for everyone to see, so they know they’re working on something which is of real value. That value is visible when you’re projecting the future, and that’s what drives everyone forward.  Seeing the value.”

“You always have to be ahead of the team, and thinking about what’s next. Looking into the future of the product, the market, the code, and everything in order to have a clear idea for what lies. There is no point in looking into the past.”

Taso is not a Kanban or Scrum guy, he is a driven and motivated CEO, and he sees value, progress and teams. I started to think that we can learn more from guys like him than from people who are just “spreading the word”.

For me a good stand-up meeting is for the team - facilitated by project management -, it is about the next day and blocking issues. Don’t waste your time on the past and issues not related to the team.