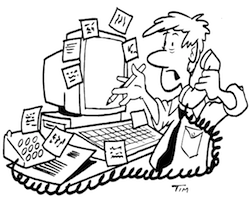 I found a very interesting quote that I wrote in one of my notebooks a long time ago: “we keep people busy all the time”. There is no date after it so I’m not sure about the exact context in which it belonged when I put it down, but I’m pretty certain that it refers to capacity utilization and utilization rate. According to reference.com, capacity utilization generally rises when the economy is healthy and falls when demand softens. Compare this definition and the quote from above. According to the definition, the utilization rate is changed by the demand and the quote said that we kept the utilization rate of the people high. The fact that the actors are completely different suggests that we were definitely doing something wrong - now that I think about it, we still do.

Most of the companies I know keep employees busy all the time, because, for example, an idle developer doesn’t write code, this means no new features, hence no profit, although the company pays his salary. There is some truth in this reasoning, however I see some issues here. When the demand is low and the employees are still working on something they will create a large inventory (muda) and they will eventually burn out (muri).

If a company ignores these issues, then the employees will do something about it. That’s the natural order of things: people take care of themselves and will reduce the muri and muda, but not the way the company would like them to. They most probably will have longer breaks, shorter working days and days off to reduce muri and have some slack time. Most of the employees don’t know much about muda or inventory, they simply feel that they aren’t doing tasks that matter. They start to learn new skills, get interested in other projects or in extreme cases they will work on their own projects and eventually leave the company. 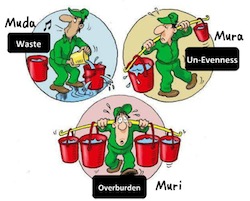 From the system’s point of view it doesn’t matter that the employees are busy or just look busy. They will simply not be able to react to a change in demand quickly enough, because they are doing something else. I’m not saying that being idle is a good practice, but pushing work on people won’t move you forward. A pull based system helps to reduce the muri and muda wastes and provides the necessary flexibility for organizations. If the demand is low, there is nothing to pull so employees will be temporary idle, but when the demand changes they can pull the next work items, because they are available. If they feel overburdened they simply won’t pull immediately. This requires a secret ingredient: trust. The employers should trust the employees that they’ll make the right decisions when they pull a new work item. If the employees don’t know how to make the right decisions, they can be trained (this is what Toyota does when a new employee joins the company). 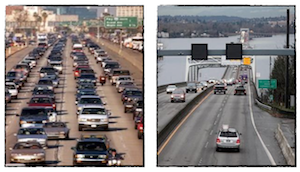 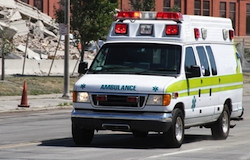 One can argue that most of the traffic jams are moving, but only very slowly, and this argument is valid until an ambulance shows up. It simply cannot pass through although it has to, so everybody else stops and pulls over. But there is more. Let’s say a vehicle can go faster than the rest. In heavy traffic the possibility that it will cause an accident with the frequent overtaking is quite high. And the accident creates a bottleneck. If the quality of the road is bad, drivers will pay attention to the road - protecting their vehicles - not to the traffic and in heavy traffic this can cause accidents as well. The ambulance can be an important issue, the fast driver can be an experienced developer, and the low quality road can be a code base without any test cases.

Let’s go back to the definition: capacity utilization generally rises when the economy is healthy and falls when demand softens. So, the demand is the variant which matters. We need organizations which can follow the variety in demand and are ready when the flow is coming. Instead of the utilization we should focus more on the throughput. Is it enough for the demand? How long does it take to deliver? What about the value? For me these are the important questions - “do you have something to work on?” is not.