I’ve quite recently had a discussion with one of my friends, Tom, who has been working for a large company - not a telecommunication one -, about the behaviour of one of his new colleagues, Jeff. Tom didn’t understand why Jeff wasn’t doing his utmost to be a valuable member of the team during his probation period. I told Tom that there might be a good explanation, and it was possible that Jeff could finish his probation period with his non-cooperative attitude. I wasn’t saying that what he was doing was right, but it was possible. I think one should consider the possible scenarios even if they look less possible in the given context, and in this case Tom had to do something about the problem, because he was the only one who had first hand information about what was going on.

For the sake of the example, let’s assume that Jeff’s attitude is part of a strategy. Have a look at the payoff matrix on the right, which shows the possible outputs from the perspective of the company. (Please note that the matrix and following chapters contain numbers I made up in order to show a version of Jeff’s strategy.) Being cooperative means doing his utmost to help move the company forward, being non-cooperative means to do a minimum and take advantage of the helpfulness of others. When both are cooperating, Tom can add 0.75 to the output, because he uses 0.25 for helping Jeff getting around, and Jeff can add 0.25, so they generate 1. When Jeff doesn’t cooperate, but Tom does, the output is 0.75, because Tom is the only one who contributes. His other 0.25 is wasted on Jeff as a teaching effort. The bottom left corner of the matrix shows 0.6. Tom adds 0.5 as a minimum in order to avoid attention to his poor performance. Since Tom is not helping, Jeff couldn’t add too much, but let’s say he could come up with an extraordinary 0.1. The last corner shows 0.5 which comes from Tom as his minimum.

According to the matrix it is the best interest of both to be cooperative, however Jeff can secretly choose a strategy where he doesn’t cooperate, because this strategy also provides results. A manager may say that a new employee will be productive after six months, and a drop in the output can be accepted, because teaching takes time and effort. So, if Jeff’s strategy is not revealed until the probation period is over, he will survive just fine. He may look like an average employee, which is not bad for someone who is not cooperating at all, while the responsibility is on Tom. 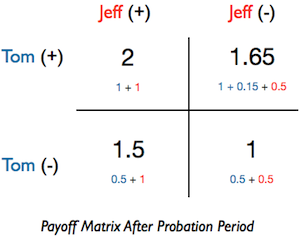 Let’s say that after the end of the probation period, the cooperation from any of them adds 1 to the output, and non-cooperation adds only 0.5, because none of them wants to lose their job. Interestingly, the game doesn’t have to change after the end of his probation period, because neither Tom nor Jeff is interested in changing their strategies. There are two reasons.

First, have a look at the top right corner of the next payoff matrix, which shows the output when Tom cooperates, but Jeff doesn’t. It’s not exactly 1.5. It is about 1.65, because Tom may want to save the situation and add an extra 0.15 (or more). It is more than double of the previous 0.75, and it is also more than the output of a good and an average employee working together: 1 + 0.5. Even without the extra 0.15 it looks acceptable in a large enterprise context.

Second, Jeff’s behaviour will attract some attention eventually, but his position is good. He won’t just be fired - you need a very good reason for this in many countries -, so he can temporarily cooperate until things quiet down. However, Tom’s position is worse: he cannot add more - he has already been performing at 115% -, and his stopping cooperating will also attract some unwanted attention. From another perspective, the change in Jeff’s strategy will have a positive effect: he is improving, whilst the change in Tom’s strategy will have a negative effect: he is doing below expectation. So, none of them is interested in changing strategies.

However, what Jeff is doing is morally questionable, and Tom is the one who can do something about it. Now, still within the probation period, Tom feels that something is going on, but he is afraid to talk to Jeff, or ask for help from his manager (this has a different root cause, but that doesn’t matter now). Tom is still convinced that one always cooperates during probation, and everything is going be to fine. I’m not saying that there are people with evil agendas out there, but considering other aspects won’t do any harm, and talking to Jeff is a must, no matter what Tom thinks. Maybe he is not as good as he looked during the interview, or there is something else going on.