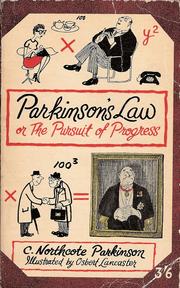 The famous Juan Manuel Fangio had a very good year in 1957, because he won the Formula One Championship, which was his 5th win - the 4th in a row -, and with the age of 46 he became the oldest world champion. This is really impressive, however, 1957 was also the year when C Northcote Parkinson, a British naval historian wrote a masterpiece about how organizations in his age were operating. In his book, Parkinson’s Law, he caricatures bureaucracy and how decisions were made in the public sector at that time. It is one of the best books I’ve ever read, but it is also one of the books that scares me the most. After 56 years, most of the chapters still apply, suggesting that there is really nothing new under the sun.

There is one particular chapter that became very famous and has been referenced since: High Finance, or the Point of Vanishing Interest. If this doesn’t ring a bell, maybe Parkinson’s law of triviality, or the bicycle shed discussion does. Nevertheless, the law states that “the time spent on any item of the agenda will be in inverse proportion to the sum involved”. Wait a minute! Does this “Law” really state that it is easier to decide what kind of flat to buy, than to decide which carpet will look the best there? Actually, it does, and here comes the explanation.

The chapter is a transcript of a meeting of a finance committee. The participants are about to discuss the last three items on their agenda: the budget for building an atomic reactor, building a bicycle shed for the use of the clerical staff, and finally the refreshments supplied at meetings of the Joint Welfare Committee.

According to Parkinson there are two kinds of people: those who have vast fortunes of their own, and those who have nothing at all. The members of the first group know what a million pounds looks like and what it represents. A very small part of the second group, the mathematicians and economics professors, might have never seen a million pounds, but they know what it represents, and they can make a difference between a million and a thousand pounds. The larger part of the second group, has seen a thousand pounds, but has no idea about a million, but they think it is like a thousand, and they handle it accordingly. According to Parkinson, those who are making high finance decisions unfortunately mostly come from this part of the group. And the committee, whose next item on the agenda is to set the budget for an atomic reactor, consists of these people.

The treasurer presents the 9th item on their agenda: approve the ten million pounds budget for building an atomic reactor. He distributes the plans and the related documents, and shares the concerns of the consultant engineers who previously stated that the reactor could not be finished before the deadline the sub-contractor signed for that there were details that were overlooked during the planning. The chairman thanks the treasurer for the detailed introduction and asks whether anyone has any questions. The committee has eleven members, and out of these eleven members, four - including the chairman - have no idea what a reactor is. Three don’t know what its purpose is. There are only two persons from the rest, who vaguely know how much it costs to build a reactor. Fortunately, both of them can speak up. So the first member suggests giving the assignment to another sub-contractor - a more reliable one - and involving other consultants.

The chairman thanks him for speaking up, but he says that it is too late to involve others in this project, and a significant amount of money has already been paid for the plans. If the committee decides to re-do the whole planning phase, it will cost a lot. Several members of the committee nod. Finally, the chairman asks the other person - you remember, the one who vaguely knows how much it costs to build a reactor - to speak up.

As it turns out, he is the only one who really knows something about building an atomic reactor, and not just vaguely. He also knows that the actual sub-contractor cannot be trusted, the ten million pounds is very strange, and has no idea how it was actually calculated. But he knows something else: the other members. He knows that it would take him a lot of time and effort to teach them the basics of nuclear physics so that they have a basic understanding of how atomic reactors work and what it takes to build one. So instead of speaking up and making this effort he simply says that he has nothing to add.

Since nobody disagrees, the chairman signs the document and moves to the next item on the agenda. The discussion of the 9th item took almost 3 minutes which doesn’t include the time that was necessary for distributing the documents. They are on schedule.

The next item is the budget for building a bicycle shed for the use of the clerical staff. But before the chairman delineates it, some of the members feel bad. They are not sure that they have made a good decision, and they promise themselves that they’ll prove later in the meeting that they are valuable members of the committee. The cost of building the bicycle shed is 350 pounds.

One of the members thinks that the price is too high, and suggests building the roof of shed from asbestos instead of aluminum. The other “roof experts” jump in, and one of them even suggests cancelling the project, because the staff doesn’t deserve a new shed.

The debate continues, because most of the members are able to understand what 350 pounds represents, and almost every one of them has seen a bicycle shed before. The whole debate takes 45 minutes with the prospective result of saving about 50 pounds. Now, everybody is happy, because they feel that they did something important, something that also provided results.

The last item on the agenda is the refreshments supplied at meetings of the Joint Welfare Committee, which cost about 35 schillings a month, which is about 4 pounds a year. Luckily all of them know something about beverages, and can imagine 4 pounds, so everyone jumps in. The whole discussion takes about 75 minutes, but there is no result, because they need more information on the subject, so they adjourn the meeting and make the clerk do more research.

“The time spent on any item of the agenda will be in inverse proportion to the sum involved”. It is spot on Mr. Parkinson, it is spot on indeed. Although, the scenario above is a complete fiction written about 60 years ago, I keep seeing it happen more and more nowadays. I’d love to know where the equilibrium between the time spent on a decision and the sum involved is and where is the point is when the interest vanishes. I hope that scientists are working on these problems, but until they solve them, I’ll try to keep myself away from meetings like this.