If you are a public speaker, you need a twitter account. Why? First, because twitter is the best way to get instant feedback on your talk. Second, it is the best way to stay in touch with your audience. Of course there are different ways to get other kinds of feedback, such as the feedback/happiness doors, or questionnaires at the end of the conferences, but they tell you different things. People tend to tweet about those parts of your talk that made an immediate impact on them, and they rate those parts later that they remember from your session (the long term impact). Moreover, if they have questions or got interested in your work, they can easily follow you on twitter (your name and title is not enough unless you have a very unique name that is easy to spell).

Creating an account takes about 2 minutes, and if you don’t get addicted you won’t spend too much time on twitter. A minimalistic approach can be that you don’t tweet anything at all, but have your contact information in your headline. It is enough to stay in touch with your audience. 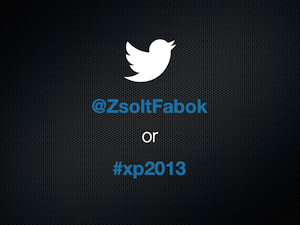 If you want feedback on twitter there are several preconditions. First, the audience should know your twitter id. I recommend having a separate slide for that. You can see my usual second slide on the right. Add the conference hashtag as well so that those who attended a different session will know what they’ve missed from your talk if they check the conference’s feed. Second, you need people in the audience who are actually twitter users. A mistake you can do here is to ask people during the talk to sign up for twitter because then they’ll focus on twitter and not you. Don’t do that. And third, if you ask people to put away their laptops and phones during your talk, there is no way that they can tweet anything.

Don’t get disappointed if you don’t get tweets even if all the preconditions are there. It happens. Look at it this way: people were busy listening to you and had no time for twitter. However, you can get late tweets. There are several people who go over their notes later and tweet the interesting parts. If you made your twitter id memorable to them, they’ll tweet.

Too many tweets can also be a problem. There are hard core twitter users who can produce at least 2 tweets per minute about your session, practically they produce about 95% of the twitter traffic related to your talk. Keep in mind that we are talking about a handful of people and it is also a mistake to rely only their opinion.

After your talk, check your twitter feed, thank for the feedback if you want, favorite and/or retweet them because a bit of self marketing won’t do any harm.