At the Kanban Leadership Retreat 2013, Janice Linden showed us the “Why limiting work in progress makes sense (Kanban)?” video by David Lowe. Later on, David asked me about the video, so I had a closer look. (You may want to check his video before continuing reading.)

I liked the way he showed the importance of the WIP limit, however there are details I believe we must pay more attention to. 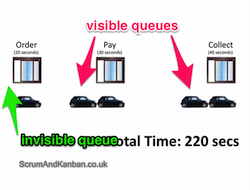 When I was watching the drive-thru video, I was thinking about the first window (order) and made two observations. First, if the current WIP is below the limit, and the first window is free, a car can enter. In every other case, the cars must be queued somewhere, e.g. at the second or third window, pay and collect (check the frame from the video on the right). Second, if the WIP limit is reached, the first window controls the flow before it. If you think about it, this means that if the drive-thru is full, the customers have to skip it, and find another drive-thru because the board “we are closed because we are full at the moment, please come back later” is on. This is not realistic. So, I believe there is a hidden and infinite queue before the first window. Moreover, the arrival rate of cars must be random and shouldn’t depend on the WIP limit set by the drive-thru.

In my previous post, I was talking about the importance of the waiting phase in the lead time between the commitment and when the actual work starts. In the drive-thru example, this waiting phase has been left out, but actually it is important. According to the video, the clock for the red car starts ticking when the total time shows 370 seconds, but actually this is valid only if the there were no cars before the red car. The possibility of this happening is quite low, therefore it is very likely that its lead time is not 200 seconds, but more. At least from the perspective of the driver of the car, and that’s the only thing that matters, I think.

I wrote a simulation script to show how the numbers change when the previously hidden queue becomes visible. The arrival rate can be constant or random, but it doesn’t depend on the WIP limit set by the drive-thru. At first, I set the arrival rate to a constant 1 car per 30 seconds, at the end of the day about 710 cars where staying in the queue before the first window (I was measuring with WIP limits from 1 to 20). However, the 40 second-long arrival rate showed an empty queue above the WIP limit of 2. This measurement wasn’t really helpful, so I started to play around with random arrival rates. In the first case I ran the simulation with rand(240) which means a p=1/240 chance to have a car at the drive-thru at any second. Here is the result: 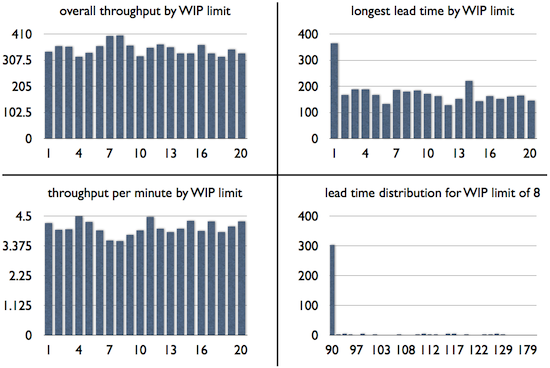 Of course, the simulation above cannot be taken too seriously, yet it tells us something interesting. The WIP limit is important, but it shouldn’t be constant over time, and it should be aligned with the arrival rate, in other words: the demand. It would be too early to state that this statement has anything to do with Abby’s Law - “only variety can absorb variety” -, but we might have to think about WIP limits differently. There are teams that are setting the WIP limit based on their availability or capability, but what if that approach is wrong, and the WIP limit should be set according to the demand?

Now, I’m talking about things I cannot really back with proper science and data, so let me get back to the drive-thru video. David did a good job pointing out the importance of the WIP limit, but when we are talking about things like the lead time and throughput, I think it is very important to start with the proper definitions and the context. I’m missing the definition of lead time from the video (where it starts and ends) and how the cars arrive at the drive-thru (the context). I believe by adding these two details, the video can be even better.