A couple of weeks ago I had a great discussion with one of my colleagues about the Kano model and how we could use it to make better deliveries. The model itself is a classification of features of a product based on customer needs and attributes. It was created by Professor Noriaki Kano (on the right) in the 1980s. Professor Kano defined three different feature categories: basic, performance and excitement, which are represented on the diagram below. The x-axis defines the effort put into the execution/implementation of a feature, and the y-axis defines the customer’s satisfaction after receiving the feature. In the software industry poor execution can result in a faulty or unusable product.

The presence of the features belonging to the basic category which presence has no positive effect on the customer’s satisfaction - bottom right corner -, but they are must have features, so their absence or poor quality causes huge dissatisfaction - bottom left corner. Let’s say we are about to create a web shop. It is a must have feature to make it possible for a customer to sign up to the site. Even if it’s the most sophisticated sign up feature, for the users, it is just a sign up feature, but without it or with a faulty one, they cannot use the site, so they’ll leave. Satisfaction in the features categorized as performance is proportional to the quality in which the features are implemented/delivered. Let’s say we introduce Facebook as an alternative sign up procedure. It isn’t a must have feature, but it will increase the customers’ satisfaction in the project: the users can use their existing accounts, and we don’t have to store user data unnecessarily. After Facebook we introduce twitter as the next alternative. It has no effect on the existing users but may attract more customers. The last category is the excitement which is the complete opposite of the basic category: the presence of an excitement feature drastically increases the customers’ satisfaction, but nothing happens when it is not there or doesn’t work as expected. For example, we introduce a feature which allows customers to use our shop without signing up, just using their email address and PayPal. If it’s available, the users will be excited to use this great convenience feature, if it’s not, they won’t miss it. 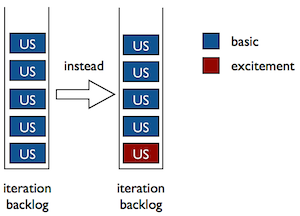 That’s all about definitions, now let’s see how to turn the Kano model to our advantage. First, always have an excitement and a performance feature in your delivery and not just basic features, and second, revise the classification after each delivery **and prioritize accordingly. Mixing categories (e.g. basic with excitement) in deliveries actually helps selling the product. Let’s say we deliver only basic features. Then, according to Kano our customer will never be satisfied, because we never leave the bottom of the diagram. For example, when we delivered a sprint backlog which contained only basic features, our customer was somewhat satisfied, but always had improvement proposals. However, when we added an excitement feature, even if it was prioritized lower, the customer always said “this is what I’m talking about!”. Excitement features are expensive, but they attract more customers and they differentiate you from your competition. Unfortunately, a performance feature is not enough, because if you execute it poorly, you stay below the “satisfied” axis, although you’ve spent a noticeable effort on it. I’m aware that taking a less important item is against every possible rule, but when our customer is satisfied, her customers will be satisfied too, which is actually a good thing, so when you are setting up a release plan, an iteration backlog or a package, always plan to include an excitement feature, even if it is a small one**.

Another interesting example: I met a product owner who wanted an excitement feature very very soon, even before the first beta release. Everybody, including her, knew that the feature is useless, but she was pretty sure that its presence would attract more customers who would never use that feature but would stay on the site because of the other excitement features we already have, but they don’t know about them yet. Time will tell whether she was right or not, but nevertheless it is a very interesting idea.

Do not forget to repeat the classification before each iteration or sprint. Nowadays, the business changes fast and it can happen that a feature which was marked as excitement yesterday becomes a performance or a basic today. In the example above I categorized the Facebook login as performance, but before the first web-shop came out with a Facebook sign in feature it was an excitement. Soon after it appeared it became performance for everybody else, and nowadays it is a basic. So as it is written in the book, revise your feature set or product backlog, and set the new categories according to the recent business needs.

In the beginning I mentioned that the effect of a certain feature depends on the execution/implementation of that feature. I think it is not enough to categorize the features as basic, performance or excitement, but you need an additional number which limits how much time can be spent on the feature. For example, a team could spend weeks on a basic feature, because they want it to be perfect, but according to Kano they’ll never step across the x-axis and make the customer more satisfied.